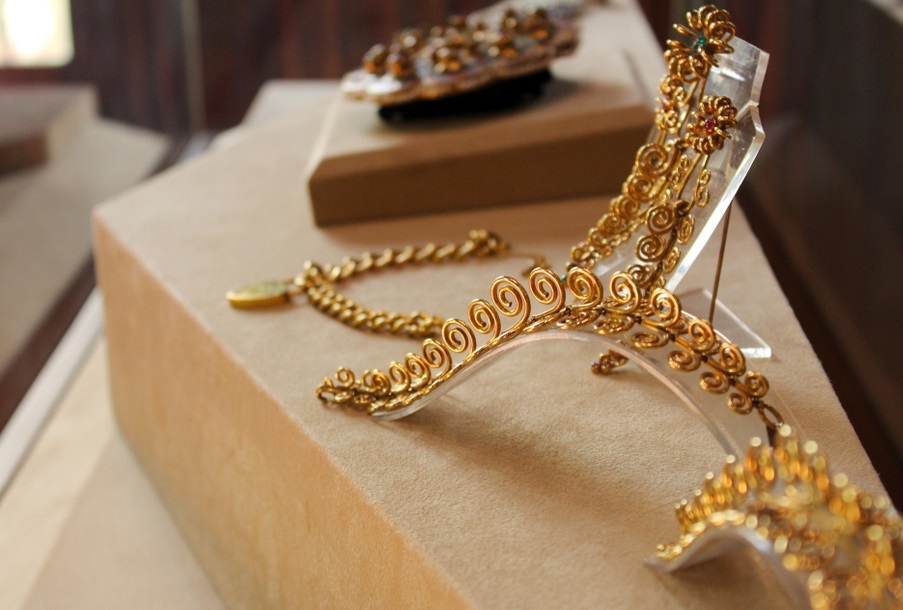 When the Duke and Duchess of Sussex emerged from Windsor Castle after their wedding to head to their epic evening reception on Saturday, May 19, the world gasped not only at the sight of Meghan Markle in her stunning Stella McCartney halter dress but also at the sizable aquamarine ring perched on her right ring finger. The breathtaking piece famously belonged to the late Princess Diana, and it served as a lovely tribute to Prince Harry’s beloved mum on the couple’s big day.  Similarly Kate Middleton has been seen wearing several of Diana’s pieces beyond her stunning sapphire engagement ring since marrying Prince William in 2011.

As it turns out, Diana left her extensive jewelry collection to her two sons in the hopes that they would one day pass it on to their wives. While some of Diana’s most memorable jewels were on loan from the royal family and returned after her passing, many of the pieces were her own and now belong to William and Harry. Keep scrolling to see all of Princess Diana’s rings, earrings, bracelets and tiaras that now belong the Duchesses of Cambridge and Sussex!

Blue stunner, which Harry has reportedly gifted his new bride, isn’t the only piece of jewelry the former actress wears that once belonged to Diana. Meghan’s engagement ring contains diamonds from the late princess’ collection

Prince William chose to propose to Kate Middleton in November 2010 with the famous heirloom engagement ring his own father gave Princess Diana in February 1981. The ring consists of a 12-carat oval blue Ceylon sapphire surrounded by 14 solitaire diamonds that are all set in 18-karat white gold. Today, Kate wears the ring alongside her delicate wedding band sculpted from Welsh gold.

It’s no secret Diana had an affinity for sapphires, and it looks like the mom of three has developed one as well. To match her engagement sparkler, William reportedly gifted his then-new bride a pair of diamond and sapphire earrings (given to his mom as part of a suite of jewels by Crown Prince Fahd of Saudi Arabia as a wedding gift) after their April 2011 nuptials. Kate reimagined the oversized studs into a more modern drop design that she regularly wears for official engagements.

It may not be the most recognizable piece in Diana’s jewelry box, but that doesn’t mean it’s any less stunning. Kate surprised many when she stepped out in Germany in July 2017 wearing the three-strand pearl bracelet designed by Nigel Milne in 1988 for her late mother-in-law.

This is one of the pieces that was loaned to Diana by Queen Elizabeth II, but we’d be remiss not to include it, as it has become a favorite of the Duchess of Cambridge as well. Following in Princess Diana's footsteps, Kate has worn the dramatic pearl and diamond tiara on several occasions, including to the annual Diplomatic Reception at Buckingham Palace in December 2016.