14 Celebrity-Inspired Gray Hair Looks You Can Have 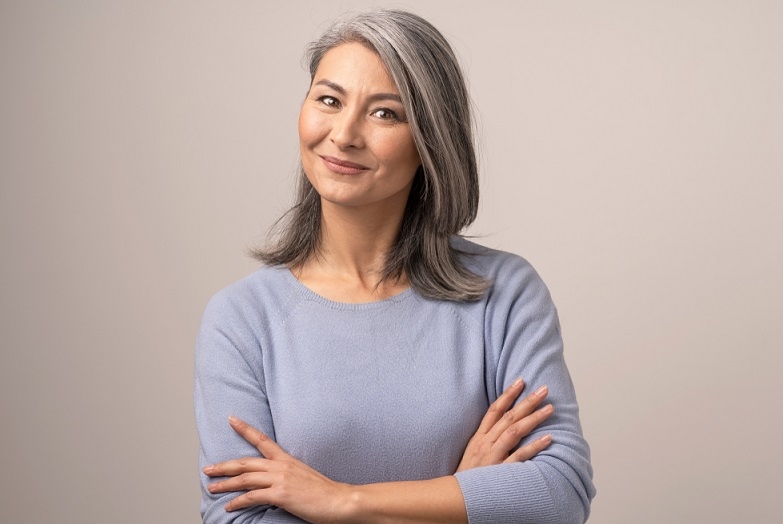 Many of us will go through the process of gradually developing gray hair as we age. Some people may choose to change their hair's color, while others may want to keep its natural shade. The latter choice may be freeing since it opens the door to experiencing a whole other hue. Gray, in our view, has all the beauty and nuance of any different color.

Hair and color expert Nikki Lee addressed everything we could about this popular shade. Here are some of our favorite celebrity hairstyles for gray hair color, complete with expert advice on achieving the looks. This is an excellent resource whether you want to enhance your natural gray, highlight some faint streaks, or play with the shade intentionally. If you are still struggling with second thoughts, here are fourteen celebrity-inspired gray hair looks that will inspire you to go gray.

The actress's short, naturally gray hair is accentuated by her penchant for wearing all-white ensembles and cutt0ing-edge styles. The actress allegedly stopped dying her hair in 2017 to avoid exposing herself to "burning chemicals on the head," as reported by Yahoo News.

The actor started graying his hair in his 30s. According to a 1977 feature in Rolling Stone, the comedian's hair and beard had been a dark brown when he was 32. Even though Steve Martin's hair is now predominantly white, it has always been a signature feature of his appearance.

Since around 2009, George Clooney has begun sporting gray and silver hair. When he saw himself on the TV the very first time, he joked; he was taken aback by the sight of his gray hair. GQ quotes him as saying, "The ancient, gray-haired guy in "Up in the Air" really threw me off. And I was the one who did it." It seems that these days, Clooney can appreciate the color.

Idris Elba's beard is beginning to show gray, yet his hair is still black. Elba's beard has become integral to his image, and he admits he feels insecure when he needs to shave it for a role.

To some extent, gray hair is artificial. Kelly Osbourne is in love with her silver and dark gray hair colors, especially when infused with purple and lavender tones, which are some of her favorite colors. Osbourne said in 2012 on "The Talk" via the Daily Mail: "It's something I've wanted to do my whole life; I've always wanted to be youthful and have gray hair."

In 2013, the TV host revealed to his audience that he doesn't bother to cover his graying hair with dye. In 2013, while appearing on "Watch What Happens Live with Andy Cohen," he vowed to his viewers that he would not be dying his hair. I can honestly say, "Hair coloring is something I've never done."

Helen Mirren, a British actress, has been sporting silvery-white hair for some time. Mirren told The Daily Mail in 2015 that women should not be afraid to experiment with their hairstyles and should not feel pressure to conform to societal norms.

"When I colored my hair pink, I felt like a princess. Many women never have the nerve to change their lives beyond what they were excellent at or did between 18 and 28." She revealed her information to the media. To paraphrase: "It's nice that some individuals rock a classic haircut that suits them, but it's far better to embrace how you look now and then be current." 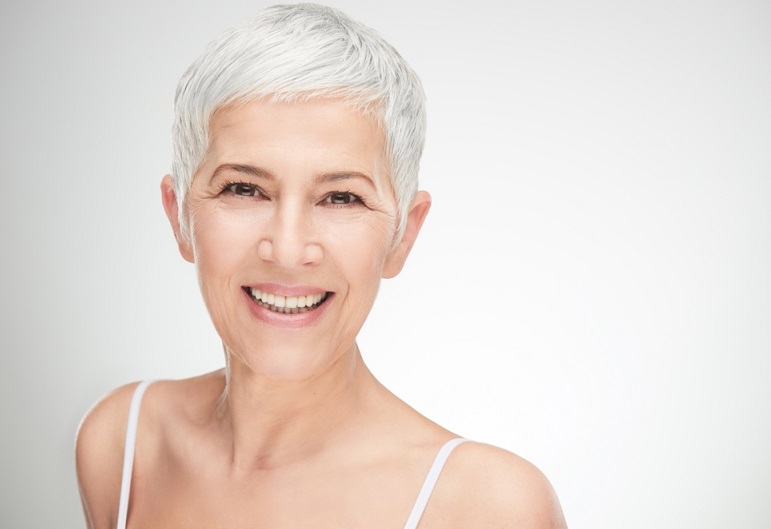 Stacy London told The Gloss that her gray streak appeared when she was a youngster due to severe psoriasis combined with strep throat. As a fashion expert, she has worn the streak throughout her career and claims she has no plans to stop.

The gray stripe was "kind of a badge of honor," she claimed, in place of her inherent insecurity. "Do however you please with my hair, but you can't color my grey streak, I told Pantene. It's intrinsic to who I am."

Fans of "Grey's Anatomy" saw Patrick Dempsey's black hair gradually turn silver over his ten years on the show. Dempsey and his wife, Jillian Fink, met in the 1990s while running a hair shop. They tied the knot in 1999, and she is still the one who cuts his hair.

While on "The Daily Show," the comic sported a full head of silver hair; after leaving in 2015, he has added a full gray beard to his silver hair. The hilarious Jon Stewart has been known to joke about how he has aged. He told attendees at the 2017 Stand Up for Heroes event in New York City, "This must be very amazing for you to see me here," as reported by The Daily Beast. "Oh my God, it must be Jon Stewart's grandpa!"

When Meryl Streep was younger, she naturally let her blonde hair go gray. Streep's white hair in her classic performance as Miranda Priestly in "The Devil Wears Prada" caused a flurry of excitement among fans. She wore a gorgeous red dress to the 2018 Oscars and absolutely nailed it.

In 2017, when Steve Carell debuted a full head of salt-and-pepper gray hair, his admirers went crazy for the appearance, to the point that they even made memes about it. Later in the year, Carell joked about the internet's fixation on his hair in an interview with Entertainment Tonight, stating, "I can't stand it when people just consider me in terms of how I look. Genetics plays a role. It's hopeless; I have no options." To which he then extended, "I can hardly contain my delight. That's fantastic!"

The fashion expert on Netflix's "Queer Eye" is not afraid to flaunt his prematurely gray hair. While becoming gray at a young age is common among South Asian males, Tan France told Refinery29 in 2018 that he was "very much at peace" with his hair. "I love these traits about myself, and I want other kids who aren't Caucasian to feel the same way."

Andie MacDowell sported her natural gray hair on the red carpet at the 2021 Cannes Film Festival after introducing her new salt-and-pepper waves on Instagram. She explained to Vogue last month that the inspiration for the change came from her children.

During her period in quarantine, her hair began to grow, and her children often remarked that mom "looked badass" with her new gray hair. The actress claimed it made her feel "more powerful" to embrace the appearance now, even though her management had advised her "it's not the time" to go gray. 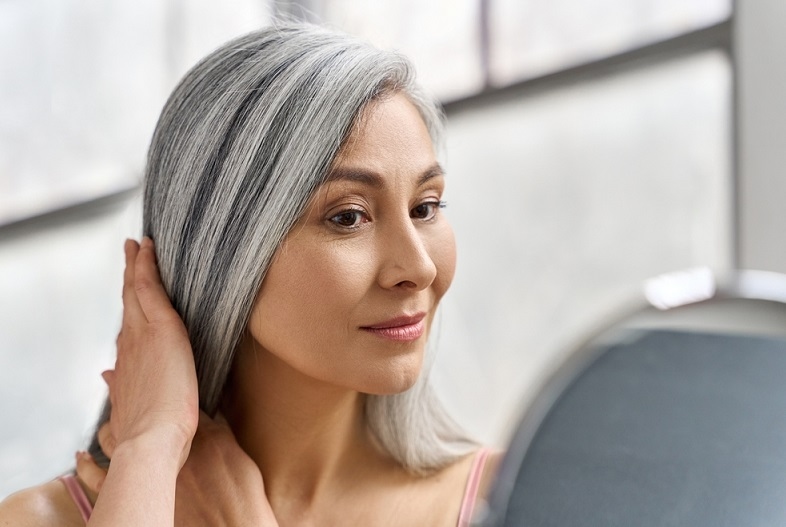 Facts That Are Actually Kind of Cool About Gray Hair

Opting for a color: Think about your skin tone, your natural hair color, and your lifestyle when deciding on a shade, but remember that it's all up to you.

The severity of maintenance: A higher level of care is usually associated with decreasing weight and increasing silver color content. Keep in mind that people with naturally darker hair than blondes will have more difficulty maintaining gray and silver shades since they require pre-lightening. Also, the contrast will be much more pronounced, and touch-ups will be more frequent as your natural color develops (unless you like to show your roots). When compared to traditional single-process color, balayage requires far less upkeep.

Shades of the Same: Platonic and silver-blonde

Price: Full color may start at approximately $200, while pre-lighting can begin at around $150.

How can one wear short gray hairstyles?

Steel gray and black hair give supermodel Jourdan Dunn a rich and flexible aesthetic. It's a fantastic and trendy way to age gracefully, but this style requires constant upkeep. Nikki Lee recommends bleaching the hair before coloring it.

Sibley Scoles (an American actress and television personality) has proven herself a hair chameleon by giving us two major hair trends at once with her exquisite platinum-gray pixie and damp style. There is a common misconception that gray color hair needs more maintenance than others because of its prominence. Scoles embraces her ebony complexion, giving her a natural air of sophistication.

Another gorgeous style is the gray hue on a close crop, especially when combined with natural texture. Cynthia Erivo, an English actress, has platinum color in her hair. However, she would look just as beautiful with natural gray.

How can I achieve that shiny gray look?

Using a curling wand, you may add volume and body to your long gray hair. Using oil, massage the hair from the mid-lengths to the ends to increase shine.

To what extent would graying my hair provide volume?

For fine, straight hair, the tried-and-true technique of foil highlights, or a combination of highlights and lowlights, may work wonders. Beautiful streaks of color and the impression of fullness are two benefits you'll notice immediately.

Some famous people are starting to embrace their silver tresses, while others still hide them under color. Andy Cohen, Jamie Lee Curtis, and George Clooney, among others, are responsible for popularizing the style. Kelly Osbourne is just one example of a younger celebrity who has opted for a silver or gray hair color job. The gray hairstyles featured on WomenWire.com's celebrity pages are guaranteed to make you the center of attention if you decide to make a significant change.